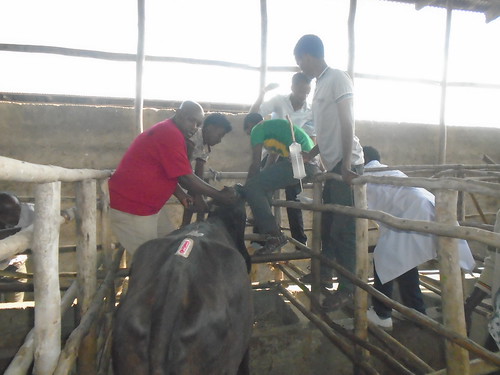 Though genetic improvement of dairy cattle has been underway in Ethiopia for decades, the delivery of improved breeds to the country’s smallholder farmers is poor. Improved dairy cows account just over 1% of the country’s cows. But the Ethiopian government hopes to produce 5 million improved dairy cows in the next five years under its Growth and Transformation Plan (GTP II).

The Livestock and Irrigation Value chains for Ethiopian Smallholders (LIVES) project is working closely with the Ministry of Livestock and Fisheries (MoLF) to improve the efficiency of delivery of improved dairy genetics through modern reproductive technologies.

Producing more female than male calves is one intervention that would increase the supply of improved dairy cows to meet the government’s goal, in addition to increasing the amount of milk produced in the country.

The project recently introduced three technological aids: sex fixer, oestrous detector and pregnancy diagnosis kit that are being tested in an action research project in collaboration with the national research system. The project is testing a female sex-fixer technology (Aulprofem®) under artificial insemination (AI) and natural mating systems. 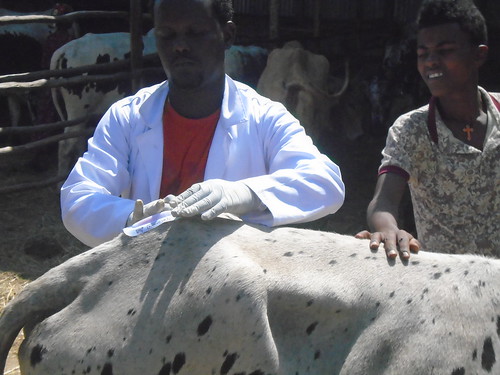 The efficiency of AI services in Ethiopia is low (about 27%) and unsuccessful insemination limits the use and successes of oestrus synchronization technologies in some cases. A major reason for the failure of AI is the difficulty of accurately detecting oestrous in cows and poor timing of insemination. Visual observation for signs of oestrus is challenging, especially at night time. An age old technology, but new to Ethiopia, known as Kammar HeatMount® Detector was evaluated in the action research project. Early observations show that the technology could be of value in detecting ‘standing heat’, which is the right sign for determining AI time.

Later, a third technology that will include a simple, farm-side and instant early pregnancy diagnosis technology (Bovipreg®) will be tested. Pregnancy diagnosis through rectal palpation cannot be made before 60-90 days post AI resulting in loss of milk and calf production time, besides being very intrusive and disliked by farmers.

The next step after the action research will be demonstration of the technologies to livestock input suppliers/service providers, researchers and development partners for wider adoption and scaling up/out.