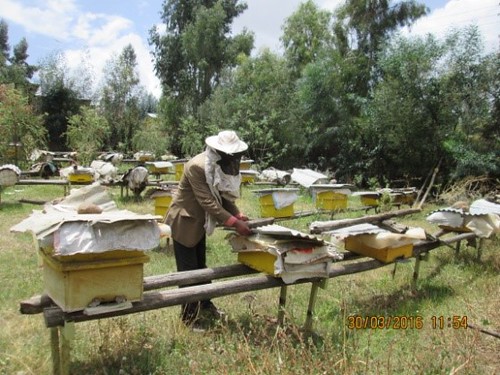 Fufa Keneni lives in Reji Mekoda peasant association (PA) of Ada’a Berga District of Oromia region. He is engaged in apiculture and dairy production. His apiculture experience dates back to some 15 years.

A former soldier in the Derg regime, Fufa started to operate a small shop with ETB 500 capital, after the fall of that regime. But, his business did not break even. He then decided to venture into apiculture starting  with two traditional beehives. The Office of Agriculture of the district supported him to buy some 20 modern beehives but his hives suffered a high rate of bee colony absconding, which can lead to losses of up to 50 colonies a year.

A course on improved beehive management offered by the Livestock and Irrigation Value chains for Ethiopian Smallholders (LIVES) project at the Holeta Agricultural Research Center turned his life around. ‘It healed my pain’, says Fufa. Using a mixed group training approach, the course targeted development agents, producers and local carpenters from various PAs.

He uses the traditional beehives mainly for wax production saving up to ETB 14,000 on wax purchases. Now he produces enough amount of foundation wax to construct honey combs. He is now planning to start selling wax for ETB 300/kg in his community.

With the income from the apiculture, Fufa has expanded his small shop, which now includes a small café and a boutique. He says that his experience has inspired many farmers, who have now realized that they could also improve their incomes  through apiculture business.

Fufa is now a local resource person who is regularly consulted by fellow farmers and development agents. Many of them have visited him to learn about his practices. Over the past six months, more than 70 farmers have personally visited or consulted him on telephone particularly on bee feeding during dearth periods. In addition to the learning, visiting farmers have also accessed inputs, such as bee forage seeds from him.

In addition to creating employment opportunities for five young people. Fufa has transferred practical knowledge and skills to many of his employees some of whom have started their own apiculture businesses. Two of his former employees have started apiculture production in Ada’a Berga and Meta Robi districts, which are LIVES intervention districts. These young farmers own 35 beehives. Another young farmer, who formerly worked for him, owns 18 modern beehives in Kuyu PA, Gebre Guracha district.

After gaining more experience and also earning more money, Fufa expanded his activities into a dairy farming where he keeps nine crossbred dairy cows which cost ETB 35,000 (USD 1600) each. He says his motivation is to help others; otherwise, his shop alone would be enough to earn a modest living.

The LIVES team has also supported his dairy farming by training him in improved housing and feeding of his dairy cows using molasses and wheat bran,which has increased milk yield from 12-18 liters of milk a day from each of his crossbred cows.

He has now expanded his dairy farm to 10 dairy cows and 16 calves (9 heifers). He has also started baling hay with his own bailing machine and has also bought a  feed chopper worth ETB 40,000. He sells a litre of milk for ETB 15 mainly to workers at the Muger Cement factory and in his village. The remaining milk is used for home consumption, turning it into cheese and butter. Fufa also provides bull service for his neighbours. He is now hoping to open a concentrate feed shop and to provide baling services to the community. 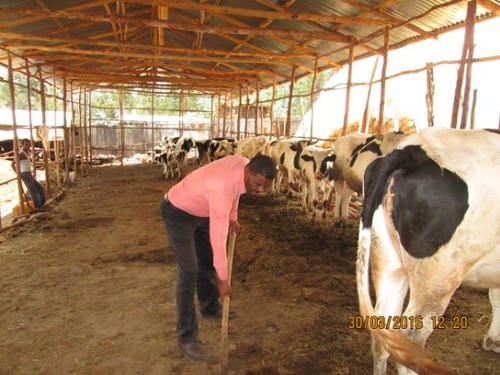 Fufa is planning to set up a honey refinery plant to produce quality honey for export. He sees that the production volume of honey in his district and beyond is increasing due to improved apiculture production practices. He has already applied for an investment license in apiculture, dairy and fattening, and LIVES staff have advised him and facilitated the licensing process.