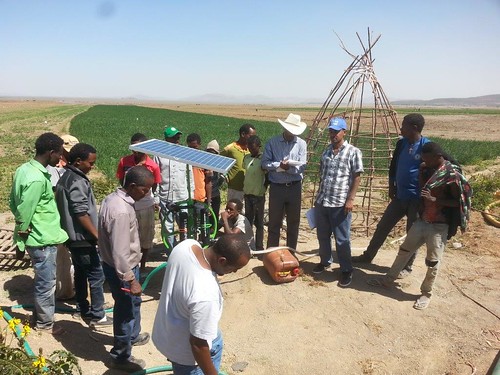 In Ethiopia, motor water pumps are used commonly. But they have higher operational costs including for fuel, oil, labour and maintenance.

Solar water lifting pumps are a promising alternative that could lower costs for farmers because they have relatively lower operational costs in addition to contributing fewer carbon emissions and pollution, which makes smallholder farming more resilient to shifting rainfall patterns caused by climate change.

Additionally, pumps powered by solar energy are far more efficient than an equivalent AC powered pump and are cost-effective and reliable for livestock watering, irrigation, and domestic uses. Solar water pumps may be especially useful in small-scale or community-based irrigation as large-scale irrigation requires large volumes of water that require a large solar photovoltaic array.

The Livestock and Irrigation Value chains for Ethiopian Smallholders (LIVES) project in collaboration with the International Water Management Institute (IWMI) has commenced the demonstration of solar water pumps with pilot households in Oromia and the Southern Nations, Nationalities and Peoples’ (SNNP) regions. 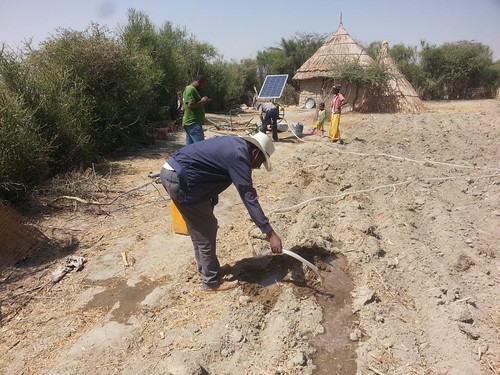 Four solar water pumps were purchased by the project from India for 2,600USD (excluding transportation and other related costs)  each of which discharges 0.5 litres of water per second from shallow wells with a maximum depth of seven metres. One solar water pump has the capacity to fully irrigate vegetables on 0.2 hectares of land.

In early December 2015, the solar water pumps were installed and demonstrated for selected households in Gamo Gofa and East Shoa Zones of the SNNP and Oromia regions respectively. The households, which were selected based on their access to shallow groundwater, interest in adopting the technology and previous experiences in household-based micro-irrigation, were briefed on the proper operation and minor maintenance services of the solar water pumps.

A business model will be developed by the end of the piloting test to demonstrate to policymakers the benefits of wider use of solar water pumps in the country. In addition, the system of irrigation water distribution and application to crops will be tested by using the drip kits and furrow methods.

6 thoughts on “Piloting solar water pumps use in Ethiopia”